Rare-earth free motors: Honda and Daido Steel have developed a neodymium magnet for the motor of its hybrid vehicles, for which it will not need heavy rare-earth minerals. The Honda Freed will be the first to feature the new technology when it hits the road this autumn.
bloomberg.com, greencarcongress.com, honda.com 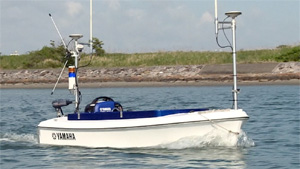 Self-driving electric boat: Yamaha has developed an autonomous electric vessel called BREEZE10. The 0.5 kW electric motor is powered by a 20 AH Li-ion battery that also supports the 1.6 kW onboard generator. That way, the ship can set out on its own for up to six hours.
gizmag.com, yamaha-motor.com

Almost there: The Solar Impulse 2 is set to land in Cairo today after a 50-hour flight from Seville. It is the solar-powered plane’s second to last leg before finishing its circumvention of the globe.
electricvehiclesresearch.com, solarimpulse.com

ElringKlinger invests: German parts manufacturer ElringKlinger plans to invest 10m euros to start developing their own complete battery system for electric vehicles. The company is currently seeking partners in Asia to manufacture cells. They could be ready start building in three to five years.
badische-zeitung.de (in German)

Powertrain inverters: Infineon Technologies is working together with TDK to develop a solution for inverters to be easily used in electric powertrains. This enables developers to quickly test and implement concepts. They have improved upon Infineon’s existing HybridPACK, using the latest IGBT3 chip and installing six DC terminals. The new tool will have both automotive and industrial applications.
chargedevs.com, tdk.edu

Solar Impulse returns: The solar-powered aircraft, Solar Impulse 2, had to land in Hawaii last summer during its flight around the world. Now, its two pilots are ready to continue their 35,000km trip across the Atlantic Ocean. The flight is set to resume in April, with 25 days of flying spread over five months. The plane is powered by 17,000 solar cells and on-board rechargeable lithium batteries.
dailymail.co.uk

Most clicked link on Tuesday was the Segway-type Zero Scooter in a vintage Vespa fashion – very oldschool and yet futuristic.
classicdriver.com

4 motors, 4 prototypes: Japanese SIM-Drive presented its fourth prototype featuring its in-wheel motors in all four wheels. The SIM-HAL (High efficiency All-wheel Link) is a two-seater with 350 hp or 260 kW combined power of all four drives.
technologicvehicles.com (with videos)

Twice as powerful: Swiss company Brusa says it doubled the power density of its two-component inductive charging system ICS. The increase to 7.2 kW is due to a new patented technology. A second generation ICS prototype will be presented this fall, while the development of the first generation is ongoing.
greencarcongress.com

Fuel cell control unit: At the MobiliTec in Hannover, Bosch presents its new fuel cell control unit (FCCU) for off-highway vehicles like airport ground support equipment. The FCCU is based on hardware from Bosch’s automotive production, while the software is designed to increase energy efficiency.
greencarcongress.com

ABB to support Solar Impulse: ABB forms a technology alliance with Swiss company Solar Impulse. Together, they plan an around-the-world flight in a solar-powered plane for next year.
cleantechnica.com, eco-business.com