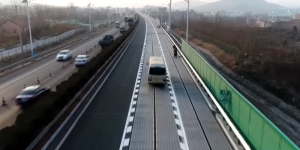 The 2 km-long photovoltaic pavement stretch opened in the Chinese city of Jinan a few days ago is already out of order. Unknown perpetrators stole one solar panel and damaged seven other ones. In total, the highway features 5,874 square metres of solar panels.
latimes.com 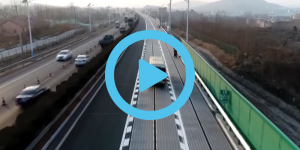 The Chinese city of Jinan started testing a 2 km-long stretch that is equipped with 5,874 square meters of solar panels. In future, electric vehicles driving on it, shall be able to charge inductively.

Last-mile solution: Green Energy Motors has made a foldable electric scooter that fits in a train’s luggage compartment. The Trikelet comes with two tiny rear-wheels and a front-wheel for steering. At 12 kilos, a top speed of 12 mph and a price of 1,350 dollars, the Trikelet could become a very attractive (but not exactly pretty) solution. However, it will take at least another year to arrive on the market, the company said.
greencarreports.com, youtube.com (video)

Active volcanic catalyst: From the middle of the earth, the active volcano Mount Aso to be precise, comes a new material which could replace platinum in fuel cells. The enzyme called H2ase S–77 is said to be 600 times more active than platinum and was discovered on Kyushu Island, Japan, by a researcher from Kyushu University.
hydrogenfuelnews.com, cleantechnica.com

Crowd fond of Solar Roadways: A crowdfunding campaign for electricity-generating highways which pay for themselves through the energy they produce has reached 200 percent of its original funding goal. The kickstarter campaign Solar Roadways (we reported) found 45,000 backers putting over two million dollars into the project.
ev.com

Drayson Wireless: Lord Drayson announced the launch of Drayson Wireless, a new business that will work together with Imperial Innovations on wireless power transfer systems. At the same time, Drayson restructured its ventures (including Formula E activities) placing them under the roof of the new holding company, Drayson Technologies Ltd.
greencarcongress.com, electriccarsreport.com

Li-air battery performance: Researchers at Fudan University, Shanghai, found out what effect humidity has on Li-air batteries. While higher humidity will enhance the capacity, the cyclic ability and rate performance will be limited. A paper on their work has been published in the Journal of Power Sources.
greencarcongress.com

Battery test-plant: Siemens is currently building a test-plant for automated battery production. The site is located at the Center for Solar Energy and Hydrogen Research Baden-Württemberg in southern Germany. Starting 2015, various companies will use the plant to develop close-to-production processes and new materials for lithium-ion batteries.
idw-online.de

Solar Roadways: What if our streets would actually be made of solar panels producing electricity? What if they could defrost themselves in winter? Check out the modular paving system of solar panels from Solar Roadways, you might want to support their crowd-funding campaign!
indiegogo.com