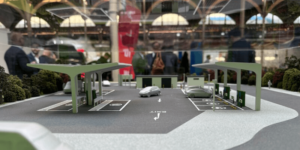 Irish utility SSE Airtricity is investing €35 mn in installing 30 high-power charging hubs across Ireland over the next four years. Parent company SSE, a British energy group, plans 300 such hubs in the UK and Ireland by 2027.

In Glasgow, Scotland, SSE Energy Solutions has opened its first ultra-rapid EV charging hub. The hub is part of an initiative to deliver 300 hubs across the UK and Ireland in the next five years.

The major British energy companies Centrica and SSE have joined the Climate Group’s EV100 initiative together with facility service provider Mitie. This commits them to electrifying all their vehicle fleets by 2030. This involves a total of around 21,000 vehicles.

Making EVs a state matter? Apparently, the Chinese government wants take subsidy policies for cars with alternative drivetrains in its own hand, putting an end to specialty rules created at the local level. The announcement was made by the country’s Ministry for Industry and Technology (MIT), after sitting down with industry leaders to discuss how to spur market growth in the sector.
autonews.gasgoo.com

Rolling it up: The Telefonix ‘L1 PowerPost electric vehicle charging station’ is the first commercial charger featuring the company’s patented retractable cord reel technology. Two of these are currently installed at the Denver Airport and in Chicago. Telefonix had exhibited its technology at the International Parking Institute (IPI) Conference and Expo over the past days.
itbusinessnet.com

Alternative drives climb UK market ladder: As of the end of May, they hold a 1.8 market share, compared to 1.1 percent in May of last year. The biggest change could be seen in the sales of hybrid vehicles combining diesel and electric motors. Sales here rose 309.1% compared to the same month last year.
smmt.co.uk

Australian-Chinese connection: Together, Australia’s Tritium and China’s SSE presented their Veefil Electric Vehicle Fast Charger at the InterSolar in Germany. The cost-efficient charger is easy to install and can give an EV an extra 50 miles (80.47 km) of range in just 10 minutes, says the company.
presseportal.de