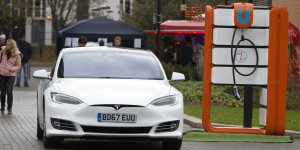 There is a new player on the scene for rapid-charging boosted by stationary energy storage. Zapinamo is a Coventry-based start-up that patented a home (!) charging station with a “power boost” from an extra battery and thus enables an output of up to 350 kW.

Ultimate charging offensive: Tianjin will soon be a mecca for electric mobility. The Chinese city wants to increase the number of charge points from now around 2,000 to 90,000 by 2020. Surely, there will then always be place to plug in.
chinadaily.com

Time of day tariff: Green Energy is now the first utility in the UK that offers residential customers a time of day tariff for EV charging. Using smart meter technology, the company encourages EV drivers to plug in when demand and prices are lower.
fleetnews.co.uk