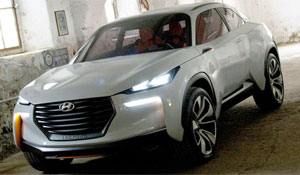 Hyundai H2 concept leaked: Images of the ‘Intrado’ concept emerged ahead of its debut at this year’s Auto Salon in Geneva. Apparently, Hyundai is determined to take hydrogen on to the next level. The drivetrain, based on ix35′s Fuel Cell (called Tucson overseas), is said to offer a range of 600 kilometres.
indianautosblog.com, autoblog.com

Viziv 2 to come: Subaru released a teaser image of its updated Viziv Concept which debuted in Geneva last year. The new version will again be unveiled at the Auto Salon and while details are not yet known, it is most likely to come with the same setup of all-wheel drive hybrid with CVT.
motorauthority.com, autoblog.com

Electric revelations by Nissan: Also in Geneva next month, will the arrow-shaped electric sports car BladeGlider have its first European appearance. Furthermore, the Japanese carmaker will present the production version of its e-NV200 which will go on sale in May. A modified version of the transporter will be offered as a people carrier under the name Evalia.
thegreencarwebsite.co.uk, greencarcongress.com

Service issues: Owner’s of Toyota’s RAV4 EV are currently venting their anger in online forums. Their complaints range from a lack of Toyota workshops actually qualified to maintain the electric car to technical problems concerning the ECU gateway supplied by Tesla. With the RAV4 EV being a Toyota product and Tesla only a supplier, customers can not expect support from Tesla’s service centres either.
plugincars.com

Review Subaru XV Crosstrek: It is the first hybrid by the Japanese carmaker and as thus welcomed by Matt Keegan as an attempt to go green. He is however not entirely sold (yet) as “fuel economy disappoints and seating comfort falls short.” Keegan remains hopeful though for future improvements.
autotrends.org