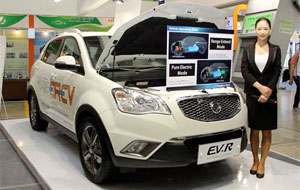 Ssangyong surprises in Seoul where it is displaying an electric version of the Korando that comes with range extender. However, the SUV is not more than a study and will serve as research vehicle mainly as the infrastructure in South Korea cannot accommodate for series electric vehicles yet. The research was being carried out with the support of the government.
yonhapnews.co.kr

Toyota FCEV ahead of schedule: The Japanese car maker will start production of its fuel cell vehicle by mid-december and start delivering the first units immediately afterwards. The price is said to be about eight million yen (roughly 78,000 dollars) but Toyota believes it will be able to cut the price by 50% by the end of the decade.
japantimes.co.jp, nbcnews.com, greencarreports.com

Formula E without Drayson? It looks like Lord Paul Drayson will hand over his place in the Formula E to a team led by former Maserati and Ferrari GT boss Claudio Berro and ex Formula 1 racer Jarno Trulli. Apparently negotiations are still on-going but no explanation has been made so far on why Drayson might back off.
autosport.com

VW delivers XL-1: The first customer for Volkswagen’s ultra-efficient XL-1 is from Berlin. He picked up the car at VW’s transparent factory (Gläserne Manufaktur) in Dresden. The plug-in, which is actually built at VW’s Osnabrück plant, is limited to 250 units and exact prices remain a secret.
green.autoblog.com

First BMW i8 delivered: Eight selected customers have already received their plug-in hybrid sportscars at a pre-launch event in Munich. With that, BMW has just managed to be the first car maker actually delivering a vehicle with laser lights, a title Audi recently tried to claim for itself.
indianautosblog.com

Poor man’s Tesla? This is the question raised by Susan Carpenter when reviewing the electric Mercedes B-class. Not only makes the company a “compelling case for EVs” but also got the details right and thus offers “the most luxurious EV experience” one can get if a Model S is not in your budget, finds Carpenter.
cars.chicagotribune.com

Interview: Chris Paine, filmmaker, about the rebirth of electric cars.