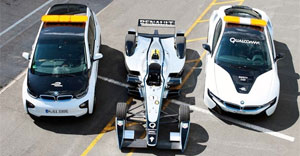 Formula wireless: The Formula E safety car, the BMW i8, will be equipped with Qualcomm’s inductive charging system (we reported). The system will transmit with a power of 20 kilowatts at a efficiency of 92% if the charging pads are not further apart than 150 mm. Starting next year, the Formula E race cars will also be charged inductively.
motortorque.com, elektroniknet.de (in German)

Three-cylinders to bridge the gap: Volvo confirmed it will introduce three-cylinder engines to better meet future emission regulations. In combination with hybrid drives, they will be help Volvo to postpone the need for mass-electrification of its vehicles for another decade.
autocar.co.uk

Ford recalls C-Max Hybrids and some Focus of the 2014 model year, due to incomplete ball bearings in the steering gear. In total, 616 vehicles are affected, 32 of which were delivered to dealers but not yet to customers. For the C-Max Hybrid its already the third recall this year.
greencarreports.com

Low-voltage electrolyser: Scientists at Stanford University developed a device which produces hydrogen by water electrolysis, using an ordinary 1.5-volt AAA battery. No precious material like platinum or iridium is necessary, according to the researchers. Because the device only runs for a couple of days, the next goal is to improve its durability.
news.stanford.edu, sciencedaily.com

were newly registered in the UK in March, representing a market share of 4.6 per cent and tripled sales.