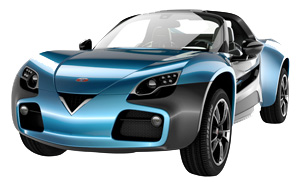 Venturi is up to speed: Besides braking electric speed records and participating at the Formula E, the Monegasque carmaker is also busy showing a new version of its America EV at the Paris Motor Show. This time, the buggy-like vehicle has doors and got its drivetrain and battery performance improved.
autoblog.com (America EV), fia.com (record)

BMW opened two new lines for the production of battery packs and motors at its Dingolfing plant. There, the carmaker expects to create more than 200 new jobs in the next few years. With the new facility, BMW is preparing for the launch of various plug-in hybrid vehicles such as the X5 PHEV starting next year.
greencarcongress.com, automobil-produktion.de (in German)

Photo-assisted charging: In a project funded by the Department of Energy at The Ohio State University, researchers developed a method to improve the efficiency and performance of Li-air batteries. They integrated photoelectrodes, which reduce greatly charging overpotentials otherwise lowering efficiency and causing degradation.
greencarcongress.com

Brake-problem recall: After Mitsubishi had to recall its electric i-MiEV in Japan earlier this year (we reported), cars in the US now have to follow. A total of 1,800 units face the risk of a malfunctioning vacuum brake pump, which could affect the braking distance and therefore increase the risk of a crash.
puregreencars.com