Munich supports EVs: The Bavarian capital wants to launch a 23 million euro programme to fund the adaptation of electric cars. Individuals will receive a 2,500 euro grant when they buy an EV. Businesses will even get 4,000 euros. 500,000 euros will be reserved for electrifying the city’s fleet, and the number of installed charge points will be increased to 2,000 by 2017, according to the announcement.
sueddeutsche.de (in German)

Transport Scotland funds EV expansion: Giving one million pounds in funding, the organisation adds a total of 50 EVs to Car Clubs in Scotland. 20 EVs will be available from City Car Club branches in Edinburgh and Glasgow and smaller car club chains across Scotland will share another 30 EVs.
heraldscotland.com 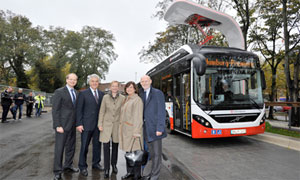 Volvo plug-in buses premiere: “Hamburger Hochbahn” officially presented the new Volvo 7900 Electric Hybrid, three of which will enter service in the northern German city in December. The plug-in buses will be rapid-charged by Siemens technology.
innovations-report.de (in German)

Boston rides hybrid: The Massachusetts Bay Transportation Authority (MBTA) has rolled out the first of 60 hybrid buses by New Flyer. The other 59 buses are expected to be delivered by the end of March and will replace the outdated bus fleet in Boston.
metro.us

Alternative fuel at Chicago Airport: The Chicago Department of Aviation (CDA) called on Clean Energy Fuels to build a 4,000 square meter “Alternative-Fuel station” at the O’Hare airport. It will feature EV charging points, as well as compressed natural gas and biodiesel.
aviationnews.net, nacsonline.com