Skoda plug-ins in 2016: A Czech newspaper reports that the Volkswagen subsidiary plans to build plug-in hybrids at its plant in Mladá Boleslav in the Czech Republic, under reference to a company application to expand its production site. Starting in 2016, the manufacturer allegedly plans to produce 250 Skoda Superb PHEV per day, followed by the Octavia plug-in hybrid in 2017.
radio.cz 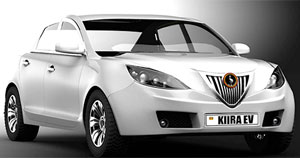 Hybrid cars from Africa: Uganda-based Kiira Motors presents its plug-in hybrid Kiira EV SMACK, a further developed version of the Kiira EV built by students from Makerere University in 2011. Starting in 2018, some 300 units of the PHEV are planned to be produced every month.
newvision.co.ug, theinsider.ug

Audi Q7 spy shots: Ahead of its official presentation at the NAIAS in January, a barely camouflaged Audi Q7 was caught on camera during test drives. The new model will also be offered as a plug-in hybrid variant next year (we reported).
cardekho.com

Electrified ATVs: Ford is selling its F-150 SVT Raptor electric in the U.S., a small EV with a top speed of of 25 mph and a range of 30 miles. The price is more impressive, as it sells for 25,000 dollars. With its 8,500 dollar price tag, the Cruser Sport by Ecocruise is not only cheaper, it also has a range of 60 miles.
greencarreports.com (Ford), bbc.com (Ecocruise)

LaFerrari XX in the starting blocks: According to Top Gear, the 1,500 hp race track version of the hybrid supercar LaFerrari will be unveiled in Abu Dhabi in December. Apparently, only a small number of the LaFerrari XX will be build.
topgear.com