French-German battery alliance? At an EU summit in a few weeks, Germany and France want to present common flagship projects, i.e. in the field of e-mobility. According to German Economy Minister Sigmar Gabriel, the development of a new generation of batteries for EVs could be one such project.
yahoo.com 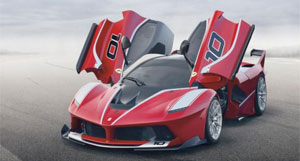 Hyper-hybrid Ferrari unveiled: The Italians take the wraps off their race track version of the LaFerrari, called the Ferrari FXX K. The hybrid is said to deliver a maximum output of 1050 hp and 900 Nm of torque. Prices and production numbers haven’t been announced yet.
worldcarfans.com, hybridcars.com

7-Series drivetrain details: According to the Spanish website “motor.es”, more than one version of BMW’s 7-Series will become available as a plug-in hybrid. Possible variants are the 730e and 740e, as well as a long version of the latter (740Le).
motor.es via indianautosblog.com

Germany passes e-mobility measures: Yesterday, the country’s cabinet approved a national energy efficiency programme (NAPE), which amongst others includes tax breaks for EVs used as company cars, an EV procurement initiative on a national and federal level, as well as a field test for the use of electric drivetrains for heavy duty utility vehicles.
reuters.com, bmwi.de (NAPE, in German)

Dutch EVs? Sports car manufacturer Spyker has filed for financial restructuring, which was approved by a Dutch court. The company´s restructuring plan sees Spyker merge with an unnamed U.S. based electric aircraft manufacturer. The latter’s technology will supposedly be used for the sports cars.
autonews.com, motorauthority.com

Chinese-made REx model: Guangzhou Auto introduces its Trumpchi GA5 REV to the Chinese market. The car combines an electric engine with an output of 44 kW and a one-litre range extender with 30 kW. Pricing starts at 132.800 yuan (21,600 dollars) after subsidies of central and local governments.
carnewschina.com