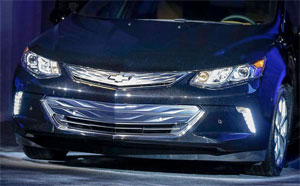 New Chevy Volt unveiled: GM already took off the wraps of the next-generation Volt at the Consumer Electronics Show in Las Vegas. Technical details will follow at the North American International Auto Show in Detroit next week where the new Volt will be officially launched.
insideevs.com, theverge.com

Hyundai to launch BEVs: The Korean manufacturer will release its first pure battery-electric car by 2016, say Hyundai officials quoted by the Korea Times. The electric sedan will be followed by an electric sports car and an electric SUV. Batteries will come from both LG Chem and the SK Group. The new EV is a change in strategy as Hyundai focussed on PHEVs before while leaving BEVs to Kia.
koreatimes.co.kr, chargedevs.com

China had to scrap its quota system restricting exports of rare earth minerals after losing a World Trade Organisation (WTO) complaint. The new guidelines still require an export license for rare earths but the amount that can be sold abroad will no longer be capped by a quota.
wsj.com, bbc.co.uk

EV exception: The German Ministry of Transport has issued a new decree for electric vans weighing up to 4.25 tons, taking into account the weight of the battery. Those EVs can now be driven by drivers holding a B driver’s license that usually allows for vehicles up to 3.5 tons only.
eurotransort.de (in German)

Model S 85 to become faster: Tesla is working on a software update for the Model S 85D and P85D. Designed to increase performance and boost top speed from 130 to 155 mph, this free upgrade will be rolled out “in the next few months”.
greencarreports.com, latimes.com, slashgear.com

Nissan Leaf and PEV sales in the U.S.