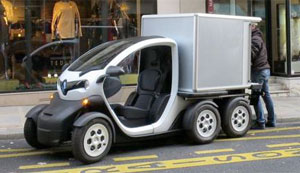 Twizy truck: On Twitter, Renault posted a picture of its Twizy featuring a one square metre large cargo area. The six-wheeled Twizy delivery concept was conceived as part of the VELUD (Electric Vehicle for Sustainable Urban Logistics) project and will first be tested in Paris. If it ever makes serial production, remains to be seen.
twitter.com (photo) via autoblog.com

Hyperlooping Texas? Tesla CEO Elon Musk announced he wants to build a test track for the Hyperloop train – most likely in Texas. There, students and companies will be able to test their prototypes that run up to 4,000 mph. Musk is even considering an annual pod racer competition. The deal with Texas is also part of Tesla’s move to the U.S. state to allow Tesla stores.
autoblog.com

Schaeffler showed its line-up of engine technologies in Detroit, allowing carmakers to meet 2025 CAFE (Corporate Average Fuel Economy) requirements. It also presented a close-to-production vehicle based on a Ford Kuga that already meets the standards due to its mild 48V hybridization.
automotiveworld.com, automobil-industrie.vogel.de (in German)

Prius fighter? The new Volt’s drivetrain has two motor-generators with its total drive power of 111 kW (149 hp). While one motor acts as a 45-kW generator, it can be used as a second motor to provide extra torque. Green Car Reports believes it could be GM’s technological answer to the upcoming new Prius.
greencarreports.com