A centre for innovation has been opened by Hyundai and Kia in the South Korean city of Gwangju. The R&D facility focuses on fuel cell and hydrogen technologies and is to fund young businesses with up to 177.5 billion won (162m dollars) in cooperation with the City of Gwangju and investors. Hyundai and Kia will provide around 1,000 unused patents to those who want to open automotive start-ups.
koreajoongangdaily.com, koreatimes.co.kr, just-auto.com 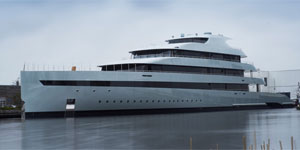 Hybrid superyacht: Dutch Feadship says it is about to build the world’s first hybrid megayacht. The Savannah is 83.50 metres long and features a diesel engine, three diesel-electric generators as well as Li-Ion batteries with a capacity of 1,000 kWh. Together, the setup is said to save about 30 percent fuel.
cnbc.com, denisonyachtsales.com

“Bulletproof” battery: A new battery technology developed by the University of Michigan is said to prevent fires like the ones that grounded Boeing 787 Dreamliners. The trick is an advanced barrier made from Kevlar, the material in bulletproof vests, between the electrodes pf Li-ion batteries.
sciencedaily.com, umich.edu

Truly eco tours: The Tongass Rain is an electric catamaran Bob Varness is looking to build. It is designed to provide a silent and thus unobtrusive approach to whale watching in his hometown Juneau, Alaska. The electric vessel is ready for production, provided crowdfunding seeps in.
kickstarter.com (campaign), juneauempire.com

Most clicked link on Wednesday was the Salamander, an all-electric amphibious rickshaw developed by H2 Technologies.
greenoptimistic.com