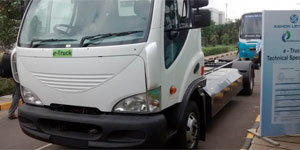 Minimalistic EV from China: The Qianli Sea Turtle only has room for two – one in front, the other in the back. The electric motor has an output of only 2.2 kW and is mated to a lead-acid battery. And the price tag is minimalist, too: The EV goes for a mere 23,450 yuan (3,754 dollars).
carnewschina.com

New hope for Spyker: Dutch luxury car maker Spyker is no longer officially bankrupt, an appeals court ruled this week. Spyker thus returns to the status of “moratorium of payment,” seeking a quick deal with creditors. The company plans to pursue previous plans and merge with an U.S.-based manufacturer of electric airplanes in order to use their technologies for electric Spyker cars “in the foreseeable future”.
autovolt-magazine.com, motoringresearch.com, spykercars.com

India-bound i8: BMW will launch its i8 hybrid sportscar in India on the 18th of February. Only a limited number will be available and for a hefty price: The i8 will cost around 20 million rupees (324,000 dollars).
indianautosblog.com, zigwheels.com, auto.ndtv.com

Lexus NX debuts in Malaysia: The SUV has gone on sale in Malaysia with the hybrid variant 300h starting at 385,063 Ringgit (about 106,000 dollars). Some 600 units have already been ordered since October; how many of them are hybrids, was not announced.
paultan.org (specs), therakyatpost.com (order numbers)

New hybrid offering in Down Under: Honda is giving its hybrid portfolio in Australia a makeover. The CR-Z and Civic Hybrid will be scrapped. Instead, Honda wants to introduce its Accord Hybrid in Australia before mid-2015 and also begin selling the new NSX hybrid sports car in 2016.
caradvice.com.au, motoring.com.au