BMW i3 to become the iCar? The Bavarians are talking to Apple about a possible cooperation, German Auto Motor und Sport reports. Apparently, the i3 could become the Apple EV, or both companies could develop a new car altogether. However, BMW was quick to deny any plans of jointly developing an EV with the IT giant but does confirms that a dialogue is indeed on-going.
auto-motor-und-sport.de (rumours in German), reuters.com (denial in English)

Conti to court Apple: Meanwhile, automotive supplier Continental has expressed its interest in becoming a partner in the iCar project. Conti would be interested in acting as partner for Apple if the company decides to build a car, CEO Elmar Degenhart said.
europe.autonews.com, appleinsider.com

Aston Martin EV to get serious: As reported, the Brits brought the electric DBX Concept to Geneva. Now it looks like it is much more than a show car as Aston Martin CEO Andy Palmer told Automobil Produktion that the electric Crossover might hit the market as early as 2018.
automobil-produktion.de (in German) 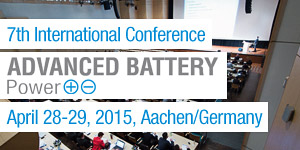 7th international conference Advanced Battery Power, April 28-29, 2015, Aachen/Germany. Advanced Battery Power offers an excellent platform for companies, research institutes, universities and individuals to present their work and results in battery technology to a wide expert public. About 600 participants meet at the additional exhibition and the evening event. Be a part of it and register now!
www.battery-power.eu

Lower priced e-Golf: Volkswagen has announced a new trim line of its all-electric Golf in the US. The 2015 e-Golf Limited Edition will cost nearly 2,000 dollars less than its SEL counterpart at 33,450 dollars. Changes concern interior and exterior features like seats or lights.
greencarcongress.com, autoguide.com

Class 3 PHEV truck: Efficient Drivetrains (EDI) now offers a plug-in hybrid system for utility trucks. The system offers an all-electric range of up to 40 miles. The battery is further said to hold enough energy to operate work tools on-site or to act as power source in an emergency.
electriccarsreport.com