Fuel cell for mass production: A European industry consortium is to develop a blueprint for a 90-kW fuel cell stack to be mass manufactured and widely used in the car industry. The VolumetriQ project receives 5 million euros from the EU over three years and is led by British Intelligent Energy.
greencarcongress.com 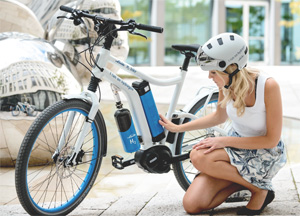 Linde fuel cell pedelec: This e-bike by Linde is powered by hydrogen. The small fuel cell holds 34g of H2 that translate to a range of 100 kilometres. Linde plans to produce a limited number of prototypes of its H2 bike that will mainly serve as promotion tool.
the-linde-group.com

Improvement: UQM Technologies has introduced the PowerPhase HD (+) electric propulsion systems. It improves UQM’s motor system technology as the HD (+) offers an enhanced thermal path and an increase in continuous power of up to 25% for handling difficult demands on heavy duty vehicles.
greencarcongress.com

Most clicked link on Wednesday was Aston Martin’s announcement to electrify the Rapide sports car by the end of 2017. Up next in the British brands electric line will be the DBX. E-xciting times ahead!
bloomberg.com