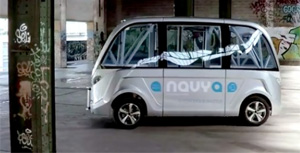 Autonomous shuttle: French Navya‘s autonomous electric mini bus has caught the eye of the Swiss. Public transport provider PostBus intends to deploy two of the EVs in the city of Sion in a joint project with EPFL and start-up BestMile. The trial is said to run until spring 2016 without passengers and on a closed site.
phys.org

3D-printed EV: Local Motors presents its next electric car fresh from the 3D-printers at SEMA. The LM3D Swim will become the world’s first serial “printed” EV and will go on sale in spring 2016 for about 53,000 dollars.
gizmag.com, slashgear.com, youtube.com

Revived: The 13 MWh energy storage project using old electric Smart batteries is fully operational since yesterday. It is the largest second-life project to date. The facility was built by Daimler, Getec Energie, and The Mobility House in the German town of Lünen (we reported).
autocarpro.in, pv-magazine.com