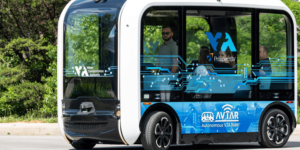 Protean Electric has revealed that the contract is worth $7.3 million, the equivalent of about 6.1 million euros. The use of in-wheel motors in the Olli 2.0 is expected to maximize passenger space, vehicle range and platform reliability while unlocking cost benefits. In addition, the supply agreement should help accelerate the introduction of the Olli 2.0 “around the world,” says the company.

The predecessor shuttle Olli was developed by Local Motors and IBM and was first presented back in mid-2016. At the time, a prototype was also on the road on behalf of Deutsche Bahn at the Euref campus in Berlin, but Local Motors later withdrew to the American market. The current version, the Olli 2.0, was unveiled in September 2019.

The Olli 2.0 comes with a range of up to 160 kilometres and travels up to 40 km/h. In addition, the new model has the wheel hub motors from the cooperation with Protean Electric, while the 1.0 model still had axle motors installed. The Olli 2.0 comes 80 per cent from the 3D printer. Local Motors says its autonomous e-shuttles are now “in use on universities and public roads in America, Europe and Asia.” But commercialisation is just beginning. LM Industries, Local Motors’ parent company, was granted $15 million in funding in autumn 2020 further advance the development, production and deployment of Olli.

“Olli is truly changing the way that we look at transportation, providing a smart, safe, sustainable option for getting around,” says Vikrant Aggarwal, president of Local Motors. “One of the keys in driving broad-scale adoption of electric autonomous vehicles is delivering an exceptional passenger experience, and the ProteanDrive in-wheel motors play a huge role in that experience, providing a smooth, quiet, and reliable ride while allowing us to optimise vehicle design to address real-world use cases better.”

Andrew Whitehead, CEO of Protean Electric, is pleased with the intensified alliance with Local Motors, saying, “This new deal not only reinforces Local Motors’ commitment to the ProteanDrive IWM solution but offers important industry validation that the technology is mature, reliable, scalable, and delivers the cost and performance needed to address the massive acceleration in electric vehicle adoption.” He continued, saying that Protean Electric has been developing and refining its in-wheel motor technology for twelve years. In addition to Local Motors, it currently has close ties with four major automotive OEMs.

Protean Electric was founded in 2008 and said it holds more than 160 patents related to electric motors. In June 2019, it was announced that Saab’s successor company NEVS (National Electric Vehicle Sweden) had acquired Protean to use its electric drive technology in future electric cars. Protean Electric will continue to operate as an independent company. Through NEVS, Protean thus belongs to the Chinese real estate group Evergrande, which made massive investments in electric mobility in 2019.

In February last year, we took the chance to talk to the CEO’s from Protean and Local Motors about the work on Olli.

Volvo Trucks reveals specs for the FH, FM and FMX