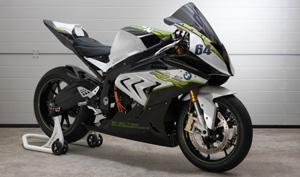 BMW shows electric road racer concept: The eRR motorbike is based on the S 1000 RR sports bike and features an all-electric drivetrain. The prototype was developed together with the University of Munich. Technical details will only be released at a later date.
bmwgroup.com

0.4l hybrid in the making? According to Autocar, newly revealed BMW patent images could show a highly efficient hybrid (we reported) that will consume a mere 0.4 litres/100 km. However, due to the project’s low profitableness, the car will probably never make it to serial production.
autocar.co.uk

Apple executive joins VW: Volkswagen has appointed Johann Jungwirth as its new Head of Digitalization Strategy. Jungwirth is said to have worked on the electric car project Titan while at Apple, after working as chief of Mercedes’ Silicon Valley research and development division, where he also pushed connected and autonomous driving vehicles.
autoblog.com, volkswagen-media-services.com

3D series: Local Motors says it will present a number of models of the recently presented LM3D Swim series next year. The 3D-printed EV will be built at the microfactory in Knoxville, Tennessee, which will be completed by the end of the year. First deliveries are scheduled for early 2017.
greencarcongress.com