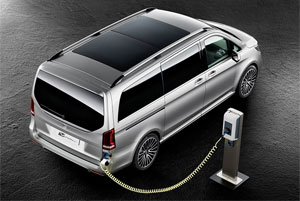 Daimler steps up electrification: Mercedes readies four electric models as part of its Ecoluxe project. The first saloon is set for 2018, one year earlier than previously planned, and will be followed by a midsize crossover and a S-class size saloon and SUV. All will be based on the Electric Vehicle Architecture (EVA) and built in Bremen, Germany. Moreover, Daimler kicked off the New Electric Vehicle (NEV) project in China, which will launch its first EV by 2020.
carmagazine.co.uk

Tesla burn out: A Model S caught on fire while charging at a Norwegian Supercharger. Firefighters let the Tesla burn to the ground as water with added copper suitable to extinguish EVs is too costly. No one was hurt and Tesla is currently working with the authorities to determine the cause of the fire.
teslarati.com, insideevs.com; fvn.no (in Norwegian)

Suzuki’s fuel cell motorbike is taking shape as the company revealed plans for commercialisation. Testing on public roads is scheduled for 2016, as soon as Japan’s ministry of transport writes regulations. Also the Burgmann fuel cell scooter will be realised (we reported).
asia.nikkei.com

Outlander delay: The U.S. entry of Mitsubishi’s best-selling PHEV has again been pushed back. The launch of the 2017 model is now set for “late summer” this year, a spokesperson revealed.
greencarreports.com

Model S facelift? The Tesla classic may get a make over this spring, following the Model 3 launch. According to a Tesla forum member quoting a service advisor, a new Model S could incorporate features of the Model X. The original post has since been deleted. Maybe it disrupted Tesla’s PR schedule?!
electrek.co