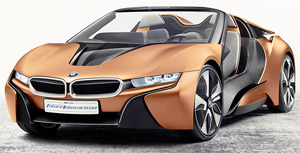 Connected EV: BMW is using the CES in Las Vegas to present new technologies for its i3 and i8. The BM i8 Concept Spyder i.e. embodies the manufacture’s vision of automated driving and digitally connected vehicles, featuring cameras rather than side mirrors. Also, the i3’s battery charge level can soon also be displayed on your own hallway or bedroom mirror. How very useful…
mashable.com, autoblog.com

Evatran eyes China: Chinese supplier VIE is pouring 3.2m dollars into Evatran, whose inductive charging technology will also become available in China. In North America, the latter currently offers its wireless system for the Nissan Leaf, Chevy Volt, and Cadillac ELR. The technology is said to also available for other models already this quarter.
businesswire.com

Autonomous alliance: GM has invested 500m dollars in Uber opponent Lyft, with the goal of getting an “autonomous on-demand” fleet on the road. The Chevy Volt is a likely first choice, as General Motors will start testing a fleet of self-driving Volt in Canada.
worldcarfans.com

Aguri looks for partner: Aguri will get its electric powertrain from a rival Formula E team next season, since the development of the own technology is too costly. It looks as though Renault is the current favourite.
autosport.com