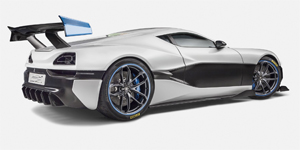 Rimac Two: The Croatian brought a second EV to Geneva as previously suggested. The Concept_S is even more powerful than the Concept One, boasting 1,018 kW and AWD. The 82 kWh battery should last for a race or two – top speed stands at 365 kph – and the carbon model is also lighter than the original Rimac.
autoblog.com, electricautosport.com, hybridcars.com

Quirky Toyota: The Japanese carmaker’s latest hybrid seems to pay homage to the film Mad Max. The Kikai sits three people and all inner workings of the microcar are clearly visible – even for the driver, who can watch the wheels turn at his/her feet. Careful though, there is no autopilot mode yet.
technologicvehicles.com, toyota.co.uk

Model X ready for Europe: Tesla has opened the configurator for European buyers of the ‘Signature’ edition and thus reveals pricing. Prices vary from country to country but are considerably higher (around 172,000 dollars) than in the U.S., due to VAT applied on the continent.
electrek.co

For the few: The Chiron debuted in Geneva as anticipated. Its price of about 2.6m dollars could be a hurdle for some, but Bugatti says it received about 150 orders for the super hybrid. The Veyron successor sports 1,479 hp and a top speed of 261 mph despite weighing 2 tons. Production of 500 units is set for autumn.
carscoops.com, autocar.co.uk

Strike: Gigafactory construction came to a halt, as about 100 workers refused to continue working in protest of out-of-state employees hired by Tesla contractor Brycon Corp. The EV maker has denied the allegations and says the majority of workers are from Nevada.
autoblog.com, bloomberg.com

SUV tax: The Indian government plans to levy a 4 percent tax on cars that are longer than 4 metres and have a high engine capacity. Trikes, as well as electric and hybrid vehicles and FCV are exempt.
livemint.com

Proterra buses logged more than 2 million electrical miles in the U.S.. The milestone was reached during revenue service by 63 electric buses in 9 different states. Proterra plans to double its production capacity this year.
greencarcongress.com