Tesla with even more range? The Californian is allegedly working on a 100 kWh battery pack. A hacker says he discovered code in the recent firmware that reveals the model name P100D, as well as the corresponding logo.
electrek.co, teslarati.com 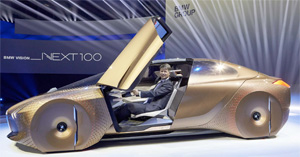 BMW vision without drive: The Bavarian celebrated its 100th anniversary, showing off future possibilities with i.e. the autonomous BWM Vison Next 100 concept car with an extremely low drag coefficient of 0,18. So far, they did not say what the drivetrain of the future will look like. We hope that combustion engines will no longer play a big part.
autocar.co.uk, carscoops.com

Clearing up China’s market: The Chinese government has revoked the production license of 13 EV manufacturers after they repeatedly violated national requirements. Shuanghuan Auto, for example, is said to have been a little too inspired by foreign designs – not an isolated incident in China. The licenses will now be given to other manufacturers.
ecns.cn

Geely hybridises: The Chinese manufacturer has kicked off serial production of its first model featuring the newly developed hybrid drive. It plans to build some 5,000 units of the Emgrand EC7. At the end of 2015, Geely announced that it wants to fit 90 percent of its offering with electric motors by 2020.
scmp.com

Subaru electrification platform: Fuji Heavy Industries announced a single production platform for future Subaru models, which will also allow for the integration of hybrid and electric drivetrains. The Impreza will be the first to roll out on the new system this year.
reuters.com, greencarcongress.com

Road tests for diesel cars: Because six models emitted up to ten times more nitrogen oxide than allowed, the Japanese government will perform road tests for diesel vehicles. The miscreants were not VWs, but come from Toyota, Nissan, Mitsubishi and Mazda. Apparently the system that reduces emissions stopped working because of the cold.
japantimes.co.jp

Bugatti without e-power: Despite previous plans, Bugatti apparently decided at the last minute to not fit its sports car Chiron with an electric motor – a small detailed we missed. We apologize for the mistake.