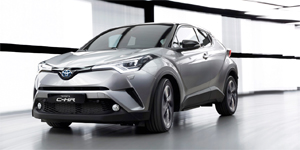 Toyota C-HR premier: Toyota will premier their new C-HR at the 24 Hours Nürnburgring race in Germany. Though a racing version of of the car will be used, a hybrid model is also set to be released. This comes in conjunction with a statement from Toyota Europe’s executive vice president, Karl Schlicht, who says the company is aiming to be the biggest hybrid brand in Europe. And here we thought they already were…
newcarz.de (in German), autocar.co.uk

Daimler backing start-up ecosystem: Daimler partnered with the Silicon Valley accelerator Plug and Play, the University of Stuttgart and ARENA2036 to establish the ‘Startup Autobahn,’ an ecosystem for start-ups in Stuttgart, Germany. The focus will be on both software and hardware technologies. Some 25 start-ups will be invited to ‘Selection Day’ in July.
greencarcongress.com, daimler.com

Possible iCar store? The recently opened Apple flagship in San Francisco sports huge glass doors, begging the question of whether they were designed for cars to drive in and out. This follows on speculations from several analysts that the tech company may be rolling out an Apple Car. Simultaneously, Tesla is also opening new stores in the Hamptons and Cape Code to lure tourists over the summer.
applecarfans.com (iCar), autonews.com (Tesla)

Porsche 918 Spyder run: Top Gear’s Jack Rix tested out the Porsche 918 Spyder and reports that the hypercar felt both fun and practical to drive. He also reported an internal economy test, wherein the Carerra GT and the 918 were driven on the same track, together, for 1,000 km. The test showed that the 918 used 30 percent less fuel overall.
topgear.com