Masterplan, Part 2 revealed: Elon Musk says the EV maker will also focus on creating solar roofs with integrated storage and that it is working on a Tesla Semi and “high passenger density urban transport,” both of which should be unveiled next year. The carmaker will also further develop its fully autonomous technology. Once in place, drivers can add their EV to a Tesla shared fleet that can be summoned by the touch of a button.
tesla.com 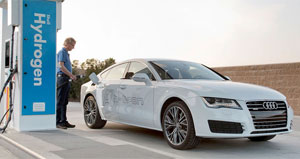 Audi focuses on H2: CEO Rupert Stadler confirmed that Audi will take over the lead in developing fuel cell technology within the VW Group. When Audi will release its first serial FCV remains unclear. The H-tron quattro concept had been previewed in January. Moreover, Rupert reemphasized the company’s goal that EVs should make up 25 percent of sales in ten years’ time.
t-online.de (in German)

New Golf previewed: The eight generation will hit the road 2019 and also be available as a PHEV and electric variant. Two designs are still in the running, one with a more stretched silhouette, the other with a steeper tailgate. It will also serve as basis for the VW NUVe, also scheduled for 2019.
autobild.de (in German)

Car-free step by step: Oslo has started redesigning the city centre, swapping car parks for food courts and theatres. The goal is to be almost entirely car-free by 2019. That also means that incentives for car owners are being scrapped and public transport improved.
tnp.no via carscoops.com

Panasonic job fair: The company is looking to hire a second wave of people for cell manufacturing at the Tesla Gigafactory in Nevada. Panasonic currently lists 42 job openings on its site. The job fair will take place on August 10th in Reno and will be Panasonic’s second hiring event in two months.
electrek.co

Mahindra Scorpio becomes hybrid: So far, the Indian offroader was a mild hybrid at most, but will now be fitted with Intelli-Hybrid technology. Features such as recuperation and an electric motor that provides an extra boost are said to lower fuel consumption by 7 percent.
indianautosblog.com