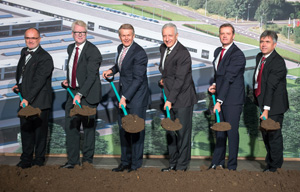 European battery factory: Daimler subsidiary Accumotive has broken ground for a second battery production facility at its site in Kamenz. The new factory will quadruple both the production and logistics area and to double the workforce, Daimler said. The corporation has invested 500m euros in what is to be one of the biggest and most modern battery factories in Europe. With a solar roof and a congeneration unit, Daimler expects the facility to be carbon-neutral.
greencarcongress.com, canadianmanufacturing.com

Connected business model: Geely subsidiary Lynk&Co. intends to conquer the market with modern sales and sharing methods. The 01 SUV will be available in Tesla-like stores in China but also online via Alibaba at fixed prices and defined trims. The doors only open via app, making sharing easy.
forbes.com, technologicvehicles.com

Faraday’s future is in peril it would seem if one looks at a 21m dollar debt for a deposit. Yet, no one does look too closely, instead AECOM has been selected (and accepted) to construct Faraday Future’s EV factory in North Las Vegas. The cost is estimated at 1bn dollars with AECOM overseeing half of it.
greencarcongress.com (AECOM), insideevs.com (debt)

Nissan Note production: The 2017 facelift of Nissan’s Note has entered production in Japan ahead of its launch in early November. The two hybrid variants start at 1,959,120 yen (18,789 USD). For the hybrid variant, an electric motor drives the front axle and the engine serves as a range-extender.
indianautosblog.com

Maruti mild-hybrid: Maruti-Suzuki is to launch its SHVS (Smart Hybrid Vehicle) with mild-hybrid technology on the Baleno next year in India. It will be coupled with the diesel variant.
indianautosblog.com

Honda goes green in the U.S.