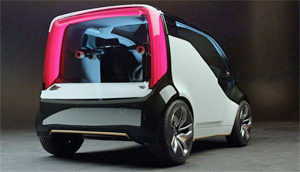 Cube on wheels: Honda showed its NeuV (New Electric Urban Vehicle) at the CES in Las Vegas, which is aimed at commuters and ridesharing services. The cube on wheels seats two is designed for autonomous driving and equipped with artificial intelligence, as well as an electric skateboard for the last mile. The NeuV can be charged wirelessly and feed energy back into the grid.
inverse.com, theverge.com, techcrunch.com

New cells from the Gigafactory: Tesla and Panasonic have kicked off serial production of their new type 2170 battery cells (21×70 mm) at the Gigafactory. The cells will be used in the Model 3 from Q2 2017. Starting now, the technology will also be featured in Tesla’s stationary battery packs Powerwall 2 and Powerpack 2.
greencarcongress.com, tesla.com

Individual mobility: At the CES in Las Vegas, Renault showed an open-source platform based on the Twizy chassis. The POM (Platform Open Mind) can be used by customers, research institutions and start-ups to create unique EVs. The carmaker also presented a new charging cable that shows the state of charge through pulsing lights. The shorter the intervals, the emptier the batterie. When the EV is charged, the lights shut off.
indiancarsbikes.in

Cash injection: EV bus maker Proterra has generated 140m dollars in its last financing round. It says it will use the money to speed up the increase production capacities at its plants on the East and West Coast in the U.S., as well as further develop the next generation of electric utility vehicles.
fortune.com, ibtimes.com