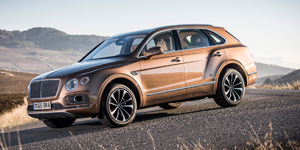 Bentley adds e-power: The British luxury brand wants to offer a hybrid variant of every one of its future models, Automotive News reports, quoting Bentley CEO Wolfgang Duerheimer. The first one on the list will be the Bentayga, scheduled for 2018, followed by the next generation Continental GT.
autonews.com

Chinese manufacturer GAC Motors presented a PHEV crossover called Enspirit at the motor show in Detroit. It has an all-electric range of 80 km. The carmaker also showed its all-electric GE3, which is based on GAC’s new EV platform. Range is estimated at 300 km. The GE3 will become available in China from June and will be marketed under the Trumpchi brand.
motorauthority.com, hybridcars.com

Bolt-based: General Motors wants to build a number of electric cars based on the Chevrolet Bolt platform, CEO Mary Barra said in an interview in Detroit. She did not, however, spill any more details.
youtube.com (video interview) via insideevs.com

New Lexus: The carmaker wants to launch the series version of the UX Concept that it unveiled at the Paris Motor Show in October. Autocar learned the compact SUV will also be offered as a hybrid under the name of UX250h and will apparently replace the Lexus CT. Moreover, Lexus is planning a seven-seater version of its RX, which will also be sold as a hybrid from 2018.
autocar.co.uk

No PHEVs for the U.S.: The diesel scandal also affects plug-in hybrids, Car and Driver reports. Apparently, the VW Group scrapped plans to sell in the Audi Q7 e-tron in the States, as well as PHEV variants for the A6 and A7, which would combine an electric motor and 3-L diesel engine. There will also be no modified versions featuring petrol engines for the U.S., meaning the Audi A3 e-tron will remain the only Audi PHEV sold there.
caranddriver.com

Plug-in sales in the U.S.