Hydrogen and diesel: A joined British-Chinese undertaking is to promote the use of hydrogen fuel for Chinese commercial vehicles. It is working on a hydrogen-diesel hybrid drive said to lower emissions by 70 percent. The project is also looking into the production of H2 using locally produced renewable energies, and helping set up H2 infrastructure.
chinadaily.com.cn, ecns.cn 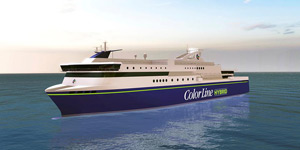 The allegedly largest hybrid vessel worldwide has now been commissioned by Color Line in Ulstein. The plug-in hybrid ferry can sail on electricity only and has room for 2,000 passengers and 450 cars. It will go into service between Sandefjord (Norway) and Strömstad (Sweden) from 2019.
maritime-executive.com

New division: U.S. drivetrain manufacturer Efficient Drivetrains announced the creation of a new development centre for electric and plug-in hybrid commercial vehicles. The division will be operated out of the company’s recently leased facility in Dixon, California, and will kick off new OEM and end-user customer projects before April.
businesswire.com

DC/DC for EVs: California-based Green Watt Power presented its new EVD 500 Series DC/DC converters for EV applications with input ranges of 30 to 65 VDC and 50 to 120VDC. Efficiency is rated at 93 percent.
thomasnet.com