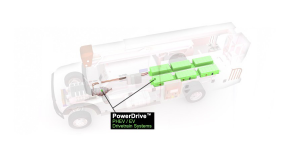 Efficient Drivetrains (EDI) has been tasked with the delivery of electric drivetrains for a 4.4 million dollar DOE programme, which will accelerate the introduction of electrified school buses in the USA.

The scheme run by the US Department of Energy, has agreed to a deal with EDI to supply an unnamed, but renown producer of school buses. The parts they will be delivering are the PowerDrive 7000EV, as well as its components.

Based on the parts, the manufacturer will then be developing electrified school buses, which will be V2G capable, among other things. Including subsidies and investment from private and public sources, the programme will have a budget totalling 9 million dollars.

EDI presented its new drivetrain last October in Columbus, Ohio, at the National Association for Pupil Transit Industry Event (NAPT). With the development, EDI had correctly calculated on the USA updating their school buses into the age of electrified transport.