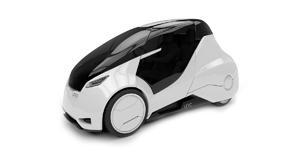 Siemens to mass produce Uniti: Swedish start-up Uniti has just become serious about building its biodegradable compact EV as Siemens jumped on board. The initially crowdfunded company that received 1.2m euros, thus enters the realm of mass production that may start as early as next year, when 50,000 LEV could roll off the lines to be delivered by 2019. In order to do so, a fully automated factory will be build in either Malmö or Landskrona and Siemens has invested 3m euros in the company to date. The L7e vehicle weighs just 400 kilos and is planned with a range of either 150 or 300 km at a price from 200,000 kronas (21,000 euros). Battery options are 11 or 22 kWh while speed is capped at 90 to 120 kph – just in line with the speed limits on Swedish highways.
nordic.businessinsider.com, digital.di.se (in Swedish), youtube.com (Uniti video update)

Renault-Nissan to form LCV unit: The alliance has created a new business unit to combine its light commercial vehicle activities, including those of Mitsubishi. As partners, they will leverage complementary markets and products while maintaining their own brand identity. Two electric vans exist already with the Nissan e-NV200 and Renault Kangoo Z.E., plus Renault said it would electrify the Master model within this year reportedly.
commercialfleet.org, alliance-renault-nissan.com

First drive: Get a taste of the Jaguar I-Pace with this review by Matt Saunders. He found the electric SUV concept “stunning” and is delighted the team is working on a production version as they prototype.
autocar.co.uk

VW’s redemption starts: CARB has received the first 200m dollar instalment from Volkswagen as part of a plan on how to spend the money to serve ZEV. About 120m dollars shall be spend in California on EV charging infrastructure over the next 30 months following the diesel fraud, the rest is for EV demonstration purposes according to the plan, which the regulators have to accept first.
greencarcongress.com, arb.ca.gov (investment plan, pdf)

The ecological onslaught of the Trump administration continues as it seeks to roll back fuel economy regulations. This is welcomed by carmakers, who had lobbied against EPA rules under President Obama, but feared by environmentalists. The move to reopen the review has yet to be made officially.
bloomberg.com

Acura hybrid: There is a new hybrid out there, the 2017 Acura MDX Sport Hybrid. It uses a V6 engine and three electric motors to produce a total system output of 321 hp. Prices start from 51,960 dollars.
carscoops.com