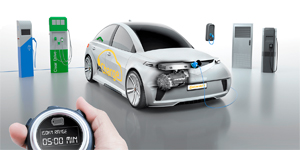 Universal charging tech: At the Continental Tech Show in June and the IAA in September, the supplier will introduce its system AllCharge, which turns the electric powertrain into a charger able to draw from all types of charging standards. It is said to use the maximum output rate of up to 800V and perspectively up to 350 kW. As the system is bidirectional, it is not only a way in but also a way out for the energy stored inside the EV batteries.
continental-corporation.com

Hungary has got its battery plant: Samsung completed construction of its battery plant as planned in Hungary, where the company wants to start large scale production. However, the lines won’t move before the second quarter of 2018. Only then the output shall accumulate to 50,000 EV batteries a year. The Goed facility close to Budapest is the European leg of what Samsung considers its global production tripod with Ulsan, South Korea and Xian, China closing the triangle.
businesswire.com, greencarcongress.com

10 x more batteries: More news from Korea hummed on the wire as SK Innovation intends to extend its li-ion battery production facilities tenfold, from 1.1 GWh in the past year to 10 GWh by 2020. Latest by then, energy density of SK cells will reportedly have been upgraded in order to enable EVs to reach 500 to 700 kilometres on a single charge.
english.yonhapnews.co.kr

eRamp project completed: Led by Infineon, 26 research partners from six countries have explored innovative electronics components for efficient energy use over 3 years. They looked at the entire power electronics value chain. Now eRamp reached its end and leaves the members convinced that the project has indeed “strengthened Germany and Europe as centres of expertise for power electronics.”
presseagentur.com