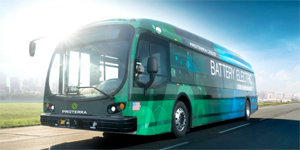 BMW invests in electric bus biz: Proterra managed to collect 55m dollar in its latest round of financing, tapping into funds from the likes of BMW i Ventures, or former vice president Al Gore. The American bus maker intends to increase its production capacities in the States and to invest in R&D as well. So far, the 13 year-old “start-up” has delivered 100 electric buses bus but says it has orders for another 300.
greenbiz.com, greencarcongress.com

Electric Kona confirmed: Hyundai’s new compact SUV will be made available fully electric, the Koreans confirmed at the occasion of the launch. The conventional Kona will hit the showrooms in Europa in August and the U.S. this December, while the EV will follow in 2018 with a 390 km range.
autonews.com, autocar.co.uk

New territories for Outlander PHEV: Mitsubishi’s best-selling plug-in hybrid is en route to Ukraine and Russia, where it will arrive later this year. Finally the long awaited launch in the States is due as well, with a new battery that charges 20 percent faster.
asia.nikkei.com

Fisker in full: The Emotion has been revealed in this latest series of pictures ahead of the opening of the order books by the end of this month. The Karma successor reportedly runs on a graphen-based battery said to last for 640km and will be out this summer.
twitter.com, autoexpress.co.uk

To pacify complaining customers, Fiat Chrysler has recalled 1,677 Pacifica Hybrids registered through June 9th, 2017. Feedback from a “small number” of drivers had led to the discovery that certain diodes may stop functioning and cause propulsion loss.
insideevs.com

Ride hailing takes off in China as UCAR invests 2.2bn Yuan (324m dollars) in EV start-up Xpeng Motors. Analysts believe the move will accelerate both companies as UCAR strengthens its position in the upper segment of the car service market, while providing Xpeng with a head start. The latter is on target to start production of its first electric SUV as planned this year. As UCAR employs drivers and owns their cars, it will become a large customer instantly.
chinadaily.com.cn, chinamoneynetwork.com