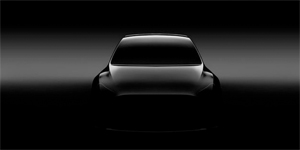 First Model Y teaser: At its Annual Shareholder Meeting, Tesla has allowed a first glance at its Model Y by publishing an image that hides more than it reveals as usual. Still, Elon Musk confirmed at this occasion that their up-coming compact crossover will not be based on the Model 3, but bear its own platform and that sales shall start by 2019. The EV maker expects demand for the Model Y to be even higher than for the Model 3.
electrek.co, teslarati.com

Luxury EV for luxury price: The Fisker Emotion is going to hit the stores in 2019 with prices starting at 129,900 US dollars. Pre-ordering will be possible from 30th of June. Besides these new details, the carmaker also unveiled new images. Technically, the luxury EV shall reach 640 km thanks to an innovative graphen-based energy storage system and is claimed to charge extraordinary fast through Fisker’s proprietary ‘UltraCharger’.
techcrunch.com, theverge.com, insideevs.com

Hyundai to increase EV production: The Koreans intend to increase the production of its Ioniq Electric from 1,200 to 1,800 cars monthly. Currently, clients have to wait 4 – 5 months. Half of the Ioniq production shall address the home market, half is to go abroad.
english.etnews.com

Outline of Kia’s Stonic: The Korean manufacturer has revealed first outlines of its compact crossover Stonic that is to be officially presented at the IAA and to hit the road before the year’s end. As reported, a fully electrified SUV version is part of the plan.
carscoops.com, europe.autonews.com

Climate deal between CA and China: Irrespective Trump’s withdrawal from the Paris Accord, representatives of California and China entered an agreement to work closer together for developing green tech. The MoU includes sectors like renewable energy as well as zero-emission vehicles, energy storage or grid modernisation.
greencarcongress.com

EV Sales in the United Kingdom.