JV for LEV: ZF believes micro mobility is the future and has set up a joint venture with Magura, BrakeForceOne and Unicorn Energy to work on two, three, and four-wheeled electric solutions. Magura has been active in the e-bike segment for some time, being Bosch’s preferred service partner in the early days. Unicorn Energy is to take on battery technology and the JV plans to present first models by late summer this year. The Eurobike show might see the launch as Friedrichshafen is also home to Zukunft Ventures as the JV is aptly named. (Zukunft means future in German.) ZF marked logistics but also passenger transport as segments for its light electric vehicles and will deliver respective drive trains.
zf.com

Daimler & BAIC to build PEV: Germany and China tighten relations as Daimler and BAIC agree to expand their cooperation to include hybrid and electric vehicles. The deal was sealed with the prime minister Li Keqiang and Chancellor Merkel in attendance in Berlin. In concrete terms, Mercedes-Benz will upgrade its factory in Beijing to produce new energy vehicles and agreed to acquire a stake in BAIC’s subsidiary Beijing Electric Vehicle (BJEV), that focuses on research and development.
reuters.com, autonews.com 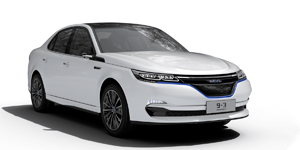 This is the 9-3 EV: NEVS readies the electric version of the Saab 9-3 to debut at next week’s CES Asia together with its offspring 9-3X which NEVS positions as an SUV. First pictures have been released. Meanwhile, NEVS announced to set up a 9-3 carsharing scheme in China’s metropolis of Tianjin.
autoblog.com, motor1.com

390 km range EV from Korea: Expect an all-electric compact SUV from Korea early next year that is said to draw a range short of 400 km from a 63 to 70 kWh battery. If Autobild is to be believed, it will most likely be an electric Hyundai Kona with batteries from LG Chem or SK Innovation.
pulsenews.co.kr

Continental to supply Nio: The German supplier is to strageically cooperate with EV start-up Nio in the field of electric transport and smart solutions as well as automated driving. The coop also includes new car platforms and Continental is to continue to deliver tech for Nio’s ES8.
automotiveworld.com, electriccarsreport.com

Mild-hybrid from Audi: The upcoming A8 sedan scheduled to go on sale later this year, will be equipped with a 48-volt lithium battery and a belt-driven alternator/starter. It recuperates energy during braking and feeds it back to the battery.
autonews.com