Siemens is ChargePoint’s new old big buddy as the German corporation joined the latest round of funding led by Daimler. The infrastructure provider thus managed to gather another 43m dollars, closing the total Series G round at 125m dollars. Siemens has got its very own stake in ChargePoint as it supplies DC charging technology and has been invested since 2010.
greencarcongress.com, insideevs.com 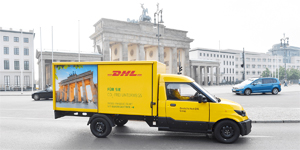 StreetScooter goes Berlin: 40 electric delivery vans and 160 charge points at 4 logistic bases are only the beginning for Deutsche Post DHL’s electrification in the German capital. 30 of the 40 homemade StreetScooters are the new large version Work L, which can hold twice the volume of the usual van. On top, the fleet is to gradually get more electric, “wherever it can as Berlin is not any odd location,” DHL board member Juergen Gerdes promised. Estimates say the Berlin mail may come fully electric by 2025, at least an exact 156 charge points with 11 kW stand at the ready by now. In total, DHL operates 3,000 StreetScooters in Germany to date and is currently gearing up to electrify 70 percent of its deliveries on the first and last mile by 2025.
electrive.net (in German)

UPS is a little less ambitious than its competitor above as it set a target to have 25 percent of its new vehicle purchases be driven by alternative fuel by 2020. Five years later, UPS wants 40 percent of its fleet to be gas and diesel free.
hybridcars.com

Leading by example: The Philippine Department of Environment and Natural Resources (DENR) took charge of five Mitsubishi Outlander PHEVs and five i-MiEV along with four quick charger units. They are part of a study and Mitsu hopes to reach more government agencies as well.
benzinga.com