E-truck market accelerates: Only days after presenting its electric van V8070, Chanje already found an exclusive distribution partner. Ryder, one of the biggest fleet managers in the States, will take over sales and services for the start-up founded by Tesla and FF managers and wants to deploy the vans to its fleet partners. Leases will include deals and one-off rentals to customers who want to try out the electric trucks with pricing to be released over the next two months.
latimes.com, greencarcongress.com 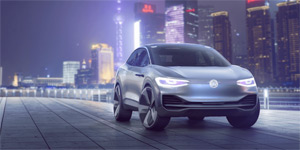 VW I.D. Crozz is to get real: Volkwagen’s I.D. Crozz concept will be next in line for serial production once the I.D. is out, Autoblog has learnt and thus confirms previous reports. The I.D. Crozz will thus become VW’s second electric car based on the MEB platform and is set for launch by 2020 or 2021. For the States though, the crossover will be the first model as the I.D. is not destined to hit the U.S. market. The I.D. Buzz however, VW’s take on its camper classic, may have not see its rollout before 2025.
autoblog.com

Electric Audi A3? Next year will see the introduction of Audi’s 2017 A3 and it looks like there will be a PHEV and EV variant too. The latter owes its existence to China’s planned EV sales quota and will be powered by the same technology the VW mothership utilises in the e-Golf.
autocar.co.uk

Range Rover PHEVs: JLR wants to offer plug-in hybrid versions of the Range Rover and Range Rover Sport from early next year. The PHEV comes with a 150 kW electric motor coupled with an 299 hp engine. The same motor shall later drive the Jaguar F-Pace, XF and XJ as well.
autocarindia.com

Tesla has set foot into Taiwan and seems determined to leave a mark. The Taiwan headquarters in Taipei City combine administration, education, experience, service and the showroom in one.
taiwannews.com.tw

Mitsubishi is on its way to Iran where it will introduce the Outlander PHEV as early as autumn now that sanctions have been lifted. The plug-in hybrid will be built in Japan and shipped to Iran.
nikkei.com