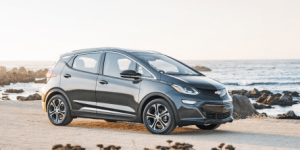 In the course of General Motor’s presentation of its electric mobility strategy in New York an interesting picture appeared: Most probably, it shows the carmaker’s upcoming all-electric crossover that is based on the Chevrolet Bolt.

As you can tell from the picture, the model seems to share DNA from Chevy and Buick, thus, it remains unclear to which of both brand’s the model is going to belong. As reported, GM promised two new electric models that are going to share features with the Chevy Bolt and – more general – to kick off an electrification initiative that includes 20 EVs by 2023.
carscoops.com, autoblog.com