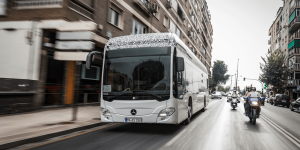 Daimler’s electric bus Citaro has found its first customer in the Rhein-Neckar-Verkehr GmbH (RNV) that operates in the Rhine region. An agreement has been signed for deliveries to begin in late 2018.

Since prototype testing started earlier this year  Daimler now appears secure enough to offer the electric Citaro to transport providers such as RNV. While it is unknown how many vehicles have been ordered, the electric buses are destined to go on a customer trial in the Rhein‑Neckar metropolitan region. In fact, it is close to the Evobus headquarters in Mannheim, where the Citaro is made. Naturally, Daimler says it hopes “to gather important findings about the daily operation” and the partners have agreed to closely exchange their findings from the trial.