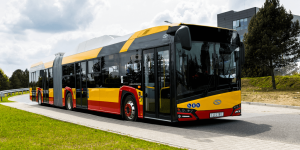 Poland’s capital wants to order 130 electric buses and is testing a Solaris electric bendy bus already. It is the prelude for a tender to be released early next year that will be worth  95 million euros.

Warsaw is no stranger when it comes to electric buses nor is Solaris. Still, 130 bendy buses is a huge order and estimated to be worth 95m euros of which 42m euros will come through funds of the European Union.

The first Solaris Urbino 18 electric has now arrived and been taken into service by the city’s transport provider MZA. While this bus is on a lease only, it serves as a test before the large tender will be released officially early next year. The tender will be calling for the total of 130 vehicles to be delivered in batches of 60 and 70 units due by 2019 and 2020 respectively.

If Solaris is to make the successful bid remains to be seen. However, Warsaw already has ten Urbino buses in operation and another ten are scheduled to arrive in Spring 2018 reportedly. Opportunities are plenty though as the city plans to put 800 low or zero emission buses into operation until 2027.