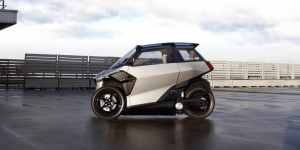 The EU-LIVE project for ‘Efficient Urban Light Vehicles’ presents its first result, a three-wheeler that can run both electrically or as a plug-in hybrid. The design was led by PSA.

While the French group took the lead on design and manufacturing as the only carmaker on the consortium of twelve partners, others made an impact too such as Elaphe and Brembo. They delivered the two electric motors that propel the trike to up to 70 kilometres per hour. The drives sit at the rear inside the wheels. Only on inter-urban roads at speeds of between 70 and 130 kph, a small single-cylinder petrol engine borrowed from a Peugeot scooter takes over and turns the trike into a plug-in hybrid, strictly speaking. Total range is thus given at 300 kilometres, aided along with the 48-volt battery by Samsung SDI that responds to regenerative braking.

The PSA trike that resembles both a Renault Twizy but also Toyota’s iRoad in driving behaviour – it tilts – falls into the L5e-category of vehicles. So far, it is a demonstration vehicle only but gained PSA thirteen patents and may serve the consortium for further developments.

The EU-Live Project led by the Virtual Vehicle Research Center in Graz, Austria kicked off in 2015 with the aim to enable a modular development approach for light (electric) vehicles. A common drive was of particular importance and the European Union funded the effort with 6.7m euros under the ‘Horizon 2020 GV5’ Research and Innovation programme.