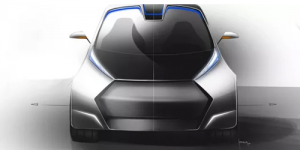 Hriman Motors wants to enter the EV market with a range of different vehicles. The Delhi-based start-up plans to debut with its first EV model in mid-2018 and says it is going to launch an electric-powered mini bus and a race car, too.

The first model to hit the market is a small two-seater dubbed RT 90. It shall provide a range of 200 km and will be offered with two different battery options: While the first version is said to require not more than 10 minutes to recharge, the second version is supposed to need two hours. The company’s RT 900 is designed to carry up to four passengers and reaches up to 350 km. Its market launch could be in late 2019. Just a few months later, mid-2020, Hriman Motors wants already to present a 1 MW race car and also the transport sector attracts the Indians: Its engineers are currently working on a vehicle called RT Transporter. The six-seater shall feature autonomous driving tech and – well – resembles Navya and Easymile regarding its design.
digit.in, hriman.com

Uniti puts its first electric car in the spotlights