Pexco launched at Eurobike earlier this year with the involvement of the Austrian motorcycle maker and automotive supplier KTM Industries. Together, they created two sub labels evoking (motor) cycling history while they also had to navigate conflicts but we get to that later.

At Pexco, the label Ramon stands for regular bicycles while Husqvarna is an e-bike only brand and set up to become the company’s leading brand. At the same time, Husqvarna has a longstanding name in the motorcycle industry and as it is owned by KTM, Pexco appears to want to build on that history.

All Husqvarna pedelecs use the Shimano Steps drive systems with the battery integrated in the down tube. A third label, R2R for Ready to Race is to launch at the bicycle show Eurobike in 2018. 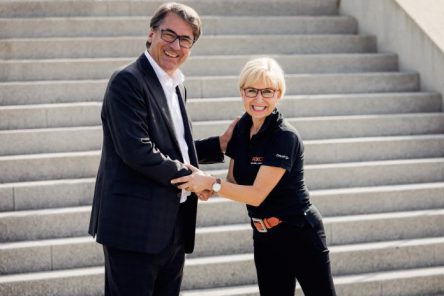 The advent of Pexco had been accompanied by rumours and some dispute. It was founded this year by Susanne Puello, who had previously led the Winora Group owned by Dutch Accell Group. Puello and her husband Felix had been known as a power couple in the (electric) bike industry, especially since they managed the Haibike brand that quickly became a mayor player in the rising electric mountain bike market.

Then last year, Susanne Puello suddenly left the Winora Group. It later transpired that she did not agree with Accell’s plan to roll out the exclusive Haibrand e-bike system developed in close partnership with Yamaha across all of the Group’s brands allegedly.

Founding Pexco together with KTM however, has not been without its challenges either because there already is a player in the bicycle market called KTM Fahrrad (bicycles). The Austrian company has a common license agreement with KTM AG (the Motorcycle-Group) dating back to the year 1997 that gives it the exclusive right to use the brand and the keyword ‘KTM’ in the bicycle sector. Furthermore, KTM Fahrrad must be considered a pioneer in the sports pedelec market as well and is thus a direct competitor to first Haibike and potentially Pexco.

Regardless of above difficulty, or maybe because of it, for KTM Industries the Pexco venture is a step into electric two-wheeler territory if only through its other brand names. Husqvarna’s electric bicycle lineup targets city-dwellers and “explorers” with model names like MountainCross or Gran Tourer evoking KTM’s motorcycle tradition.

Pexco’s market entry set for early 2018 will concentrate on the German-speaking markets in the DACH region first.

That’s how BMW envisions cycle paths in the future