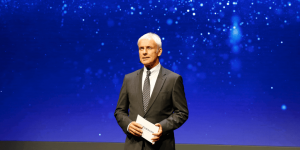 VW’s CEO Matthias Mueller has made the surprising demand during an interview and said he believes the tax benefits that accompany owning a diesel should be phased out. The idea is to prevent a ban and support the expansion of electric mobility. These seemingly insightful comments follow a simple logic.

“If the switch to environmentally friendly e-vehicles is going to take place, we cannot continue to subvention diesel combustion engines as we have previously.” On Sunday night this sentence by the VW CEO spread like wildfire, even though this was only published Monday morning in the german newspaper Handelsblatt. “Meaning and intention of the diesel subventions” would have to be re-evaluated with e-mobility in mind, according to Mueller, before demanding a comprehensive step-by-step reallocation of funding to support environmentally friendly propulsion systems. Introducing a new blue emissions sticker for vehicles would also help spur development and provide initiative. Muellers’ calculation: Less advantages for diesel motors; more incentive for electric vehicles. “We can survive this without having to go through an existential crises.”

Reactions to Muellers assertion did not tarry: “Hats off!”, said Ferdinand Dudenhoeffer, head of the CAR-Centre of the university Duisburg-Essen. Dudenhoeffer is viewed as one of the most well-known diesel critics, as well as being a huge proponent of eMobility. In an interview with dpa, the university professor admitted that he had never expected a statement like this from the VW CEO. “Finally someone else is saying it. That is very impressive.” The Green Party could also scarcely believe their luck: “If car manufacturers are demanding a dissolution of diesel subventions and blue environmental stickers, these topics must become a serious topic for the government.”, said Green Party deputy faction leader Oliver Krischer. It is not possible that politicians cling to subventions that not even the automobile industry wants.

Behind Muellers’ demands there is far more of a business mindset than ecological insight. The move away from diesel is no longer up for debate: the technology is being abandoned faster than the automobile industry could have predicted. At the same time there is growing uncertainty: When will there be the first driving bans? Which propulsion technology will be the next dominant force in the future? Vehicle manufacturers, who plan and work in immense quantities of vehicles and components, require planning security. Diesel motors had been able to provide that security for decades. However, those times are now over. Simultaneously, VW and other manufacturers have been investing in manufacturing capabilities for electric mobility. Corporations need to be able to rely on the markets and the knowledge that they can sell electronic vehicles in the next years as well though. Not only in China, but also in Germany. This will only happen once diesel tax benefits have been eliminated. Once these barriers are out of the way, Volkswagen can save on the increasingly expensive development of diesel technology, and invest in eMobility instead.
handelsblatt.com (Interview in German), handelblatt.com (Reactions to interview [also German])

Panasonic experiments with EV in temple town in Japan