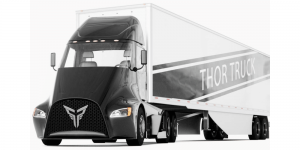 Heavy industries are rolling since Tesla launched the Semi. With Thor Trucks, another start-up presents a prototype of an electric truck and the ET-One may beat Tesla to market.

The ET-One from Thor Trucks got quite a few things in common with the Semi electric truck. Like Tesla, they are based in California, like Musk, Thor Trucks got a dynamic and even younger founder in Dakota Semler, and like the Semi, the ET-One comes in a rather daring design.

Semler told Bloomberg that some describe the ET-One as a “Transformer” – think Optimus Prime with less patriotism attached to the skin. The chassis is in fact from Navistar, while the motor comes from TM4 and the company assembles its own battery pack using LG Chem cells.

And this is also, where the ET-One may differentiate itself from the Semi. Because Thor Trucks counts on existing tier 1 components, it can set a start date for production in 2019 and is not unlikely to reach it. Shipping is to start that very same year.
Tesla also said it will make the Semi from 2019 but experiences with most of their models show that such deadlines are to be taken with a pinch of salt.

In any case, Thor Trucks also aims for a different market and sees the ET-One running errands on shorter hauls. The starting price tag is 150,000 dollars and a 300-mile range means it will compete with medium-duty delivery trucks rather than the biggest boys.

Furthermore, the company is retrofitting rather than manufacturing at the moment, but Thor is doing its own battery-pack research and recruited people from Boeing, Faraday Future, and BYD to form its 17-strong team. Chances are that they will manage to carve a piece out of the electric utility vehicle cake currently in the baking.

For now, the ET-One can be seen cruising the streets of Hollywood, for real, not for a movie and you can sign up for a fleet demonstration via the Thor Trucks website if in the States.

Reservation of Tesla’s Semi now open to everybody