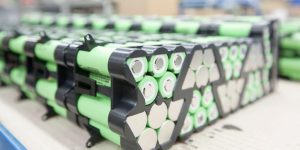 17 companies and research institutes have formed the Fab4Lib consortium to start the research and development of large scale battery cell production processes this coming January.

The Federation (Bund) funds the initiative for the series production of Li-ion batteries made in Germany with 12.1 million euros. Fab4Lib is made of TerraE, StreetScooter, BMZ, Umicore, Custom Cells, Litarion, Manz, Siemens, ThyssenKrupp, RWTH Aachen and ZSW among others.

Their  aim is to develop a production unit with an annual capacity of 6 GWh that is modular so it can be set up where and when needed.

TerraE Holding GmbH is the lead for the 18-month project that will first see a series of demonstrators. The company plans to put those into practice though in its own facilities and is currently planning a German Gigafcatory a là Tesla where it wants to produce up to 34 GWh by 2028.

BASF and TODA reinforce battery production in Japan and USA