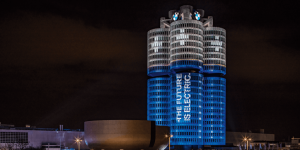 BMW has hit its target to sell 100,ooo electrified vehicles this year slightly ahead of time. To celebrate the milestone, the Munich HQ has been turned into a light installation.

It has been a good year for BMW as sales grew steadily in all segments but most distinctively so in the market for plug-in hybrid and all-electric vehicles. November alone was a record month in which BMW sold 11,710 electrified vehicles, more than ever, and an increase of 63.5 percent compared to the same month in 2016.

Their latest sales have also enabled the company to celebrate christmas early, as BMW reaches its 100,000 PEV sales target for 2017 even before the year’s end. To mark the occasion, the BMW Group HQ in Munich, four cylindrical buildings, were transformed into batteries through a light installation.

The growth in demand for the all-electric i3 was strong as more electric BMWs were delivered to customers worldwide in the year to the end of November (28,040 units) than in the whole of 2016 (25,528 vehicles).