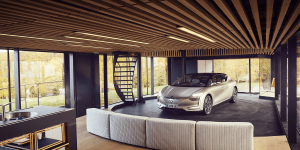 Renault is taking its Symbioz Demo Car first shown at this year’s IAA a step further and presents the next stage of the Level 4 autonomous EV. Real life testing has begun.

Renault had first presented the Symbioz concept at the IAA and recently recapitulated a future that is electric, autonomous and plugged in to both the smart grid and a fully connected house.

Said future has now been moved forward though as the French carmaker commences real-life testing with its demo car that has level 4 autonomy. Two electric motors drive the Symbioz with 500 kW and the 0 – 100 sprint takes the EV 6 seconds. A 70 kWh battery is fitted but Renault says there is room for 100 kWh.

Back to the future in which Renault imagines the Symbioz “embedded” in a garage of a fully connected house. It is no coincidence of course that the name sounds of symbiosis and it is also what Gilles Normand, who heads the group’s EV activity had envisioned as “ecosystem” in our interview at the EVS30.

Over 2,000 Tesla registered in Norway this December