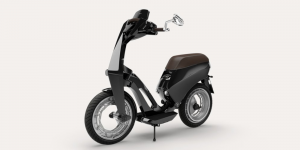 The Ujet electric scooter has thought electric driving through. The battery integrates beneath the seat and can be removed as a whole. It then turns into a cabin size bag trolley able to roll to the next socket. Once plugged in it doubles to charge smaller devices as well. As the charging cable is integrated the battery can be charged directly on the bike as well.

Two powerpack versions deliver an estimated range up to 70 km or 150 km respectively. They drive an electric in-wheel motor. There are no spokes and the steering wheel attaches to a single fork. The body of the electric scooter uses both alloy as well as carbon. All measures to keep the Ujet’s frame light.

Light it must be for the fold to make any sense. Both the steering wheel as well as the body can be folded for easier storage. Easy is relative though given the scooters weight of 43 kilos – little for an e-scooter but much to wheel around or carry even.

A large touch screen displays navigation and entertainment functions. Control though is exercised via the driver’s smartphone app. It also enables sharing and allows riders to monitor performance data such as the state-of-charge, mileage, and other information such as saved carbon dioxide emissions.

All that choice and design got their price though. The small battery model will cost about 8,900 dollars, and Ujet will ask 9,990 dollars for the large battery model. Reservations are now open via their website.